I would like to express huge gratitude to you all for your support with my Sleep Out which I completed earlier this week. Your kind words and generous donations really helped when it was getting tough outside.

On arrival at the Royal Academy of Art, we were introduced to some volunteers at the Cardinal Hume Centre who described the inspiring work that they do. We also met a gentleman who, ten years ago, had been helped by the Cardinal Hume Centre. He was only seven years old when his mother left and he lived with his alcoholic, abusive father. He started to smoke cannabis at the age of 10 and by 13 had tried all manner of drugs. He admits that he was physically violent himself and made very bad choices. At the age of 16, his father asked him to leave. It was the work of the Cardinal Hume Centre that helped him with his addictions, helped him to make good choices about his education (he went on to college) and helped him manage his mental health. Now ten years on, at the age of 27, he still has issues with mental health, but is married and works for another homeless charity helping those in a similar situation to the one he was in. We then heard from a doctor who works with people who are homeless. He stated that life expectancy is halved for those living on the streets with an addiction.

All of this gave me food for thought while I headed outside into a courtyard at the back of the Academy to make a bed for the night. Just after 11pm all the participants got into their sleeping bags. What I found interesting was that it was not only very noisy, but also very bright with neighbouring buildings leaving their lights on. Although I remained warm, it was a lonely night with very little sleep. I can only compare it to when I brought my new-born son, Conan, home from hospital and I spent the first few nights not being able to sleep and always keeping an eye on him. I felt like I was on constant alert in case something went wrong.

At 3.30am, when the rain came, I was blessed to have chosen a spot that had some shelter. So, although I didn’t remain completely dry, I was better off than some who were totally exposed to the elements. At 5.15am I packed up my bed. It was while travelling home in a taxi, passing people who were living on the streets, I reflected that I was heading home to a warm, welcoming school. All my damp belongings could be washed and dried and I would not be returning to the streets for another night, but instead to a comfortable bed. 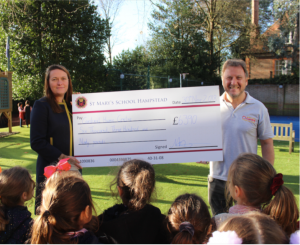 It is only by raising money, as you have all done, that we can help those people to leave the streets like the young man I met earlier in the evening. The whole experience opened up conversations not just amongst the children, but also in the staff room and with the parent body. I feel very privileged to have been able to enable these conversations and cannot thank you enough for all of your support.

I am absolutely delighted to announce that together we have raised a magnificent £6,390 for the Cardinal Hume Centre. Thank you so much to everyone for their encouraging messages and incredible generosity.

If you would still like to donate, you can do so at:
justgiving.com/fundraising/mrsconnor-earl